skip to main | skip to sidebar

The Lesbaru hit 200k this weekend. The cruise control and power locks may have stopped working, but good lord I still love this car. 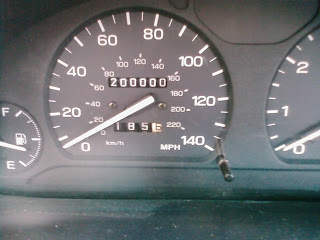 Posted by Scottie at 3:33 PM No comments:

The Ragnar Relay went well for the first two legs, for the most part. They were hard and long, but I ran them in times I deemed acceptable. Unfortunately, the second leg, an 8.7 mile monster, was along a poorly graded road at night and I was transversing a slope for the whole thing, which resulted in my developing an IT band strain in my right knee. That meant that I couldn't run my third leg. I tried, made it about 300m before I had to stop and walk, and only made it about a mile of walking before I couldn't even do that anymore. I spent the rest of the weekend with my knee wrapped up hobbling around. My team covered for me, but it was really embarrassing, especially since they're all at least 15 years older than me. I'm the young one! I'm not the one who's supposed to be felled by injury! 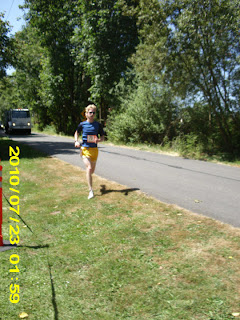 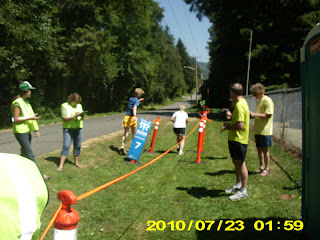 And there my teammate goes. There are more pictures, particularly of gimpy me, but I'm waiting on the person who took them to send them to me.
Luckily it's turning out to be a pretty minor injury, despite the inability to walk for a couple days. My knee is getting better every day, at about 95% now and staying off it another week should do the trick. Also fortunate is that I don't have to run for the rest of the summer! It's all cycling now, gotta get in shape for the TS100 and collegiate racing season! Which is great, because running sucks!
Posted by Scottie at 8:19 AM No comments:

Got my sinuses "roto-rootered" (as David put it) yesterday. Good times. Hopefully now I'll be able to breathe out of my nose like a normal person. 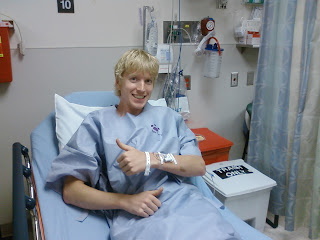 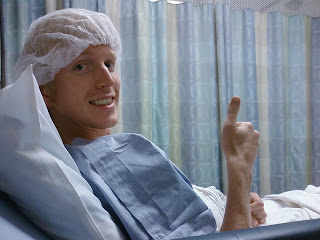 Surgical clothing is just so stylin'. 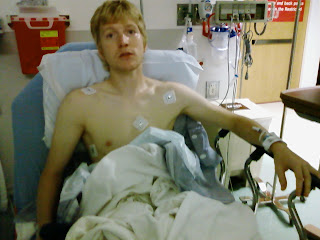 Post op, just woke up from anesthesia, feeling what could only be described as "belligerently drunk".
Next week I fly up to Oregon and then immediately drive up to Blain, WA to run the Ragnar Northwest Passage Relay. It'll be a lot of fun, but what I'm most looking forward to is the end of training for it. I'm sick of this running crap, I want to ride. All signed up for the Tahoe Sierra 100 again and it looks like they're even going to improve the course this year, taking out some fire road and putting in more singletrack. Can't wait to hit it all on my 29er! And after that, I'll actually be around for some collegiate races this year, so I'll get to keep riding all autumn long.
After the relay, I'll stay in Oregon for my brother's wedding. Everyone's getting married! Craziness!
Posted by Scottie at 1:31 PM No comments:

So Placerita Canyon ended up being a more difficult ride than I realized. I took the GPS yesterday and discovered that it's 1800ft of climbing in 3.6 miles of steep, loose, exposed fire road in searing heat. That may explain why Carie almost died when we rode it the first time.
In any case, it's still a fun ride. The downhill is still oh-so-sweet. This being my second time out there, I did two laps. I may try to keep this tradition alive while building up to the Tahoe Sierra 100; each time I go out to Placerita, I do another lap. It was...hard. And hot. Hard and hot. I'm not in the condition I was late last summer. 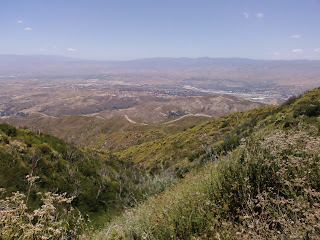 View from the climb; Palmdale valley isn't so terrible from far away. 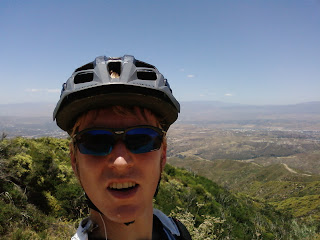 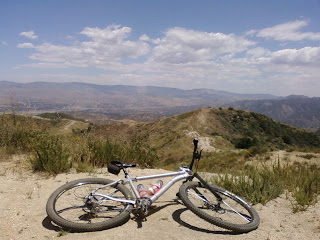 The new bike is magical. I love this thing. At some point I may try that trail that goes out just behind my bike over that ridge; only once I get bored of the descent I'm riding now, though. And that'll be a while. 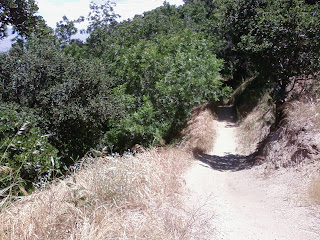 The entrance to the singletrack. Finally some shade, just too late when I don't need it. 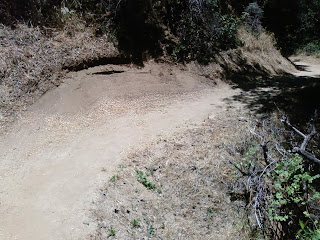 Once of the less well bermed turns. Seriously. I would swear that there are dirt bikes poaching these trails, the berms are so nice. I didn't see or hear any, so I'm not concerned; I just enjoyed railing turns. 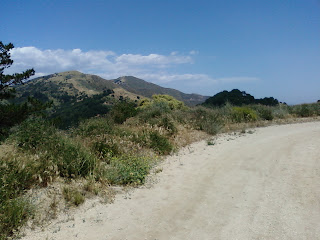 I see a lot of this type of view in the summer. Yay exposed fire road! 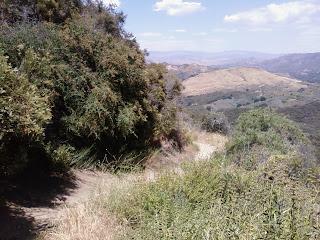 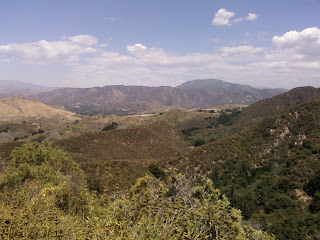 Thank goodness I live in a place with topography. 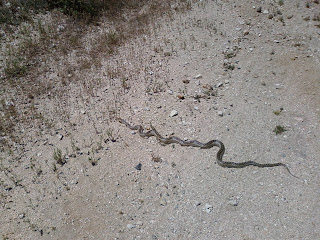 Am I the snake charmer or what? Not a rattler, looks like a gopher snake.
Posted by Scottie at 12:38 PM No comments:

Descanso Gardens Take Two and a Half

Some fun from a weeknight mountain bike ride: 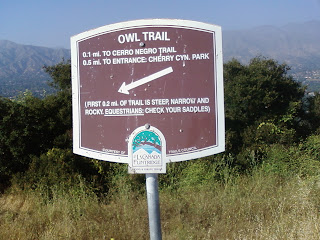 Never seen that warning before...but they do mean business. I'll get some pictures of the trail next time I'm out. 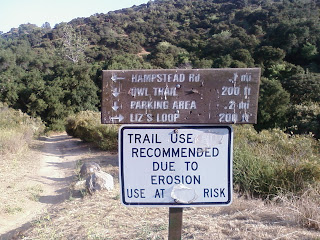 Well yeah, that's sort of the point.
PAT, I STRONGLY ADVISE YOU LOOK AWAY RIGHT NOW. 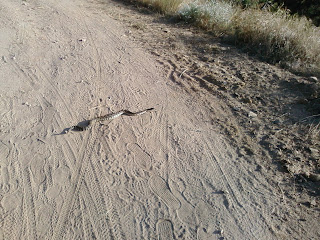 Cute little (3.5') guy just meandering across the trail. I started to switch my camera over to video and get a rock to throw at him to make him rattle, but he slithered over into the bushes and disappeared before I was ready. Probably for the best.
Posted by Scottie at 5:06 PM No comments:

It is cycling season. Ski season officially ended when I put the thick summer coat of unscraped wax on the planks, put the cheat sheets on the skins, and stowed them all in the reasonably temperate closet. It is cycling season.
Alas, I'm fat and out of shape. Well, just out of shape. But I'm getting back into shape! With the new house, a whole new area to ride in has opened up to me, at least on road (so has mountain, but I'll get into that later). I discovered that it's only 2 miles from my house to the LA River Bikeway, which takes me directly to Griffith Park. In Griffith Park, I can ride big hills, medium hills, or little hills to my heart's content, all without dealing with cars. It's funny how fun road biking can actually be when you have the pavement to yourself. It's reasonably scenic there, too, as I get to ride by the observatory, the LA Zoo, the Hollywood sign, and just around a bunch of isolated nice hills. It's an incredible park. The only problem is that the equestrians have managed to get mountain bikes banned on all the dirt trails. 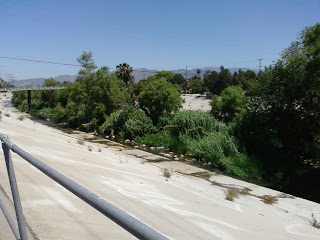 On its northerly "shores", the LA river has rebelled against its concrete enclosure and it's actually kinda nice. I see at least one heron every single time I ride by here.
On that note, however, there are plenty of other places I've found to ride that are close. Wilson Canyon with Carie was nice, but it turns out that Placerita Canyon on the north side of the ridge is way better. Sure, it's an exposed steep fire road climb in searing heat (that's just riding in SoCal, you get used to it, and if you're insane like me you learn to love it), but the descent is marvelous. It's not really technical at all, it's just fast, flowing, nicely maintained singletrack. Great berms for railing the turns. Amazing ride, only a half hour drive from home. In all it's a 12 mile loop, so I will probably be doing some 5-7 lap days out there in preparation for the Tahoe Sierra 100. I'm hoping to break 11 hours this year, we'll see.
Even closer is Descanso Gardens, a city park that features a lot more singletrack than it should (and mountain bikes are allowed!). While the loops are pretty short (~3-4 miles, 600ft vert), there are some great technical descents to be had there. There are some hilarious warnings in front of some of these trails; I'll get pictures of them next time I'm out. Even had a kit fox run across the trail in front of me at one point.
On the subject of mountain biking, I am loving the new bike. I am loving it even more since I converted my tires to tubeless. My riding buddy recommended this method to me and I followed it, though I was able to use a floor pump just fine despite their warning. 29er wheels are easier to do this with because you just use 26" tubes, which are plentiful and I already had laying around. All in all it only cost $15 for the sealant. With this, I dropped my tire pressure from 28/30 F/R to 24/26 F/R, and the difference is amazing. I'm riding a fairly low profile, low rolling resistance tire ideal for hardpack, but the things they grip stupefy me. While climbing up 20% inclines through moon dust, I just look down and am in disbelief at the terrain because they grip like they're on pavement. The traction on the way down is allowing my to ride descents without a second thought that not long ago would have made me walk. Cornering is amazing. Part of this is because they're 29er tires and the big footprint helps, but it was a noticeable difference after converting to tubeless. I'm not going back. Plus, with the super low pressure in the front, the ride is very smooth. Not just smooth for a rigid fork, but actually smooth by regular standards. As in 100mm travel fork on a 26" bike smooth. 29er plus tubeless = awesome.
Sorry for the lack of pictures, I've been exploring new trails so I've been paying more attention to where I've been going than trying to get the camera out. I'll get some more as I continue to ride through the summer. In good news, I won't have to spend August in Ohio after all, so my training for the fall mountain biking season will actually happen after all! As it turns out, there is a substantial amount of mountain biking in Ohio, though, which will come in handy next May-July, which I will be spending there.
Posted by Scottie at 4:15 PM No comments:

Who's got two thumbs and the best girlfriend ever? 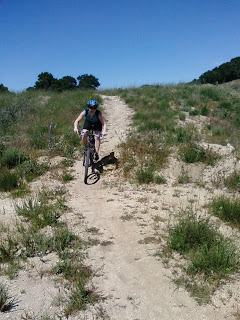 Yeah, you guessed it.
Because my usual network of trails burnt to a crisp last fall and then slid into nothingness over the winter, I've been looking for new places to ride. Something that's been on my list to check out for a while have been the very western edge of the San Gabriels above Sylmar, north of LA. This weekend Carie got back from Texas and needed some exercise to get the awfulness out of her system, so I used the opportunity to take her out riding. She's using my old mountain bike and not surprisingly it fits her way better than me. I'm using my new bike and love it, rigid carbon fork and all. The 29er wheels are amazing; it's hard to get used to them just rolling over everything even with a rigid fork.
As it turns out, the hills out there are pretty with a great network of trails. Less rocks than I'm used to, but a lot of loose stuff and very challenging. Very sandy in many parts. We had a great time exploring and will be going back to ride more soon. 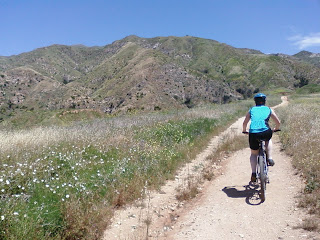 Very nice hills for riding in the Sylmar area. The wildflowers are going crazy this spring. 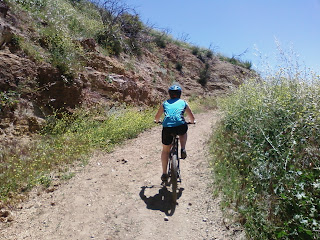 Blooming wildflowers! The "wet" winter has given us a very nice spring this year.
At this point, I will issue a PAT STOP READING NOW BECAUSE IT MAY CONTAIN SNAKES notice. If you are not Pat, please proceed:
This little guy was lying across the sandy trail apparently unable to get traction. Once he got to the leaves he slithered off just fine, but his little "dance" was so funny.
Posted by Scottie at 1:04 PM 4 comments: